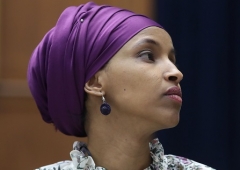 “No wonder you are being booed,” Omar tweeted in her warning to the president:

“No wonder you are being booed.

“This is a complete lie and an embarrassing tweet that shows your lack of knowledge of our Constitution.

Omar was responding to the following tweet by Trump condemning a fabricated account of Trump’s phone conversation with the president of Ukraine that Schiff recently gave at a House hearing:

“The only crimes in the Impeachment Hoax were committed by Shifty Adam Schiff, when he totally made up my phone conversation with the Ukrainian President and read it to Congress, together with numerous others on Shifty’s side. Schiff should be Impeached, and worse!”