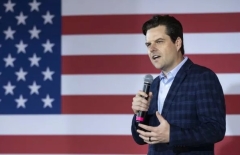 “Your gun rights are being dithered away by fools, right now,” Rep. Matt Gaetz (R-FL) said Thursday, during a break from a House Judiciary Committee hearing on a range of gun control proposals.

“It’s all dissolving out of a spasm to respond to the Uvalde (Texas) shooting, before they even know the details of that shooting,” Rep. Gaetz said in a brief interview with the American Firearms Association’s Patrick Parsons. “So, we’re very concerned right now that you see, not only Democrats – but, even some Senate Republicans - working towards gun control,” Gaetz warned.

Anti-gun House members are willing to not only restrict gun rights, but also to deprive Americans of all rights, in the name of ineffective measures that are nothing more than virtue-signaling, Rep. Gaetz said:

“This will, undeniably, restrict the rights of law-abiding people. They’ve said that in the hearing.

“And they’re willing to accept the deprivation of all rights, in order to virtual-signal - even if the solution that they’re proposing would do nothing to make these tragic events less likely.”

If janitors, teachers, substitutes and other school staff were armed, it would act as a “force-multiplier” enhancing school safety, Rep. Gaetz said.

“So, if this was really about school safety, we would be getting rid of the gun-free zones and we’d be allowing that force-multiplier for the good guys and for the protection of students,” Gaetz said.

“And, the fact that they won’t entertain any of that shows that it’s not about school safety, it’s about taking the guns away from law-abiding people,” Rep. Gaetz concluded.