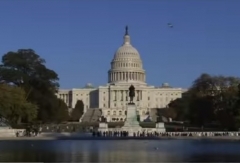 At least two members of Congress have cancelled their memberships at a popular D.C. club, due to a vaccine passport mandate imposed by Mayor Muriel Bowser (D) on the Nation’s Capital.

“As a result of their compliance requiring vax papers for entry, I am canceling my membership at the Capitol Hill Club,” Rep. Matt Gaetz (R-Fla.) declared Tuesday.

“Nowhere in America should the government or businesses have the power to medically segregate based on vaccination status,” Gaetz says, objecting to the club’s compliance with a D.C. mandate requiring proof of vaccinations for entry to businesses, such as restaurants and clubs.

On Friday, Sen. Rand Paul (R-Ky.) announced that he is following suit, tweeting:

“Quitting Capitol Hill Club: I will not be a member of any club that acquiesces to a requirement to reveal your medical records.”

“As you likely know, our Club must comply with Mayor Bowser’s vaccination mandate, effective January 15th. To enter the Club, all persons must display proof of at least one vaccination,” the Capitol Hill Club website tells patrons.