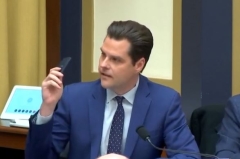 “I seek unanimous consent to enter into the record of this committee, the contents from, files from and copies from the Hunter Biden’s laptop, which I’m in possession of,” Gaetz said, displaying a small external hard drive.

Chairman Nadler, ultimately, withdrew his objection, allowing contents of the Hunter Biden laptop to be entered into the Congressional Record.

Moments ago, I successfully entered the hard drive of Hunter Biden’s laptop into the Congressional Record.

At the committee’s hearing on oversight of the FBI’s Cyber Division, Rep. Gaetz had first tried to get the division’s assistant director, Bryan Vorndran, to testify whether the laptop’s contents could present a national security vulnerability, given that they pertained to the son of a U.S. president.

Vorndran steadfastly refused to answer any such questions about the threat posed by the laptop’s contents, the laptop’s whereabouts, or whether there should be an FBI investigation of the issues Gaetz raised, saying that such topics are outside the realm of his division of the FBI.