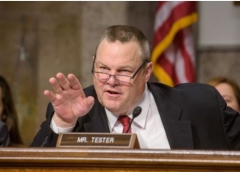 “I’m looking at you Jon Tester: flattop doesn’t make you any conservative,” Rep. Chip Roy (R-Texas) says in a video stressing the importance of senators, even Democrats like Jon Tester, voting against Democrats’ efforts to pass a voting reform bill that would federalize elections and strip states of the ability to ensure voter integrity.

Rep. Roy spoke out Thursday after House Democrats passed, along party lines, their voting reform bill, which now goes to the Senate, where Democrats are threating to eliminate the long-standing filibuster rule in order to pass it, despite holding only 50 of the Chamber’s 100 seats:

“Welcome to another day in lunacy in the United States House of Representatives where we just voted on a bill that we saw last night at about 11:30pm. We had to spend up to the middle of the night reading seven-hundred-and-some pages of a bill that massively takes over our elections by the federal government and would undermine the ability of states to make rational decisions on how they want to perform those elections – including the use of, for example, voter identification. Or restricting abuse of use of mail-in ballots without the ability to ensure the integrity of some of those ballots.”

In his video, Rep. Roy expressed gratitude to the Democrat senators who have said they will vote against eliminating the filibuster – but, he also called out Montana Democrat Senator Jon Tester, saying that merely sporting a conservative haircut (a flattop) does not actually make him one:

“I’m glad that there’s some question over in the Senate. And it seems to be that Senator Manchin (D-WV), Sinema (D-AZ) and others may hold the line on the filibuster.

“But, let’s be clear to West Virginians, Arizonans, Montanans – I’m looking at you Jon Tester: flattop doesn’t make you any conservative – but, this vote is actually about the integrity and the ability of Montana, Arizona, West Virginia and every state in the Union to make decisions about elections.

“Congress is trying to take it over. They’re trying to eliminate your ability to control your elections. It’s purposeful. And, we should be voting ‘No’ and we should be standing up strong for strong elections that are driven by states. God bless.”