Rep. Boebert: ‘Fake Handcuffs Make for a Good Photo Op’ – But, They Don’t Do These 13 Things People Actually Care About 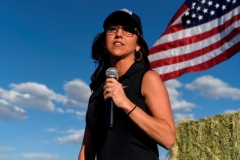 The day after Rep. Ocasio-Cortez pretended for the cameras to be wearing handcuffs as police led her out of the street she was blocking in front of the U.S. Supreme Court, Rep. Boebert used a minute of floor-time to note that the stunt did nothing to solve the problems faced by the American people.

“Mr. Speaker, this body should be delivering solutions for the American people – not fake handcuffs,” Boebert said.

“And – without restraint – I yield back,” the congresswoman concluded.