Rand Paul: Will ‘Snot-Nosed Censors at YouTube’ Now ‘Kiss My…’ Now that NYT Reports I Was Right About Cloth COVID Masks? 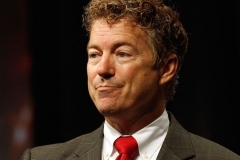 Physician and Senator Rand Paul (R-Ky.) wonders if the “snot-nosed censors at YouTube” will now come to his office and perform an act of apology now that The New York Times and Centers for Disease Control (CDC) have admitted that his comments about cloth COVID masks are not so-called “misinformation.”

“Does this mean snot-nosed censors at YouTube will come to my office and kiss my … and admit I was right?” Senator Paul asked on Twitter Saturday, embedding a New York Times story, titled “The C.D.C. concedes that cloth masks do not protect against the virus as effectively as other masks.” The article reports that, as Paul has claimed, cloth COVID masks are less effective than other types:

“The Centers for Disease Control and Prevention on Friday clarified its stance on various kinds of masks, acknowledging that the cloth masks frequently worn by Americans do not offer as much protection as surgical masks or respirators.”

“[T]he update marks the first time the C.D.C. has explicitly addressed the differences,” the article notes.

YouTube actively censors and labels what it and liberal media declare “misinformation” regarding COVID.

Last August, Sen. Paul called out “every snot-nosed ‘journalist’ who accosted me in the halls of Congress and spouted Fauci-isms denigrating natural immunity,” CNSNews.com reported:

“Sen. Rand Paul (R-Ky.) is inviting journalists who have attacked his stance on the value of natural immunity and opposition to COVID mask mandates and vaccine passports to read the results of a new study.

“To every snot-nosed ‘journalist’ who accosted me in the halls of Congress and spouted Fauci-isms denigrating natural immunity— read the science!” Sen Paul tweeted Monday, citing an article titled “Harvard Epidemiologist Says the Case for COVID Vaccine Passports Was Just Demolished” by the Foundation for Economic Education (FEE).”