Rand Paul: Fauci’s Edicts are ‘More About Submission’ than Science; ‘That’s a Real Problem in a Free Country’ 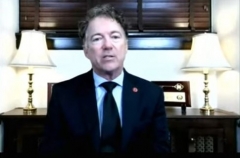 Dr. Anthony Fauci, the Biden Administration’s COVID czar, has declared himself the “all-high priest of science” who, like “the Great and Powerful Oz” can never be questioned – and that’s a very dangerous thing, physician and Senator Rand Paul (R-Ky.) warns.

In a “Fox & Friends” interview Tuesday, Sen. Paul was asked to watch and respond to video of an appearance by Fauci on “Face the Nation,” in which Fauci claimed that he is above criticism, because he is the infallible voice of science:

“Anybody who's looking at this carefully realizes that there's a distinct anti-science flavor to this. So, if they get up and criticize science, nobody's going to know what they're talking about.

“But, if they get up and really aim their bullets at Tony Fauci, well, people can recognize there's a person there, so it's easy to criticize.

“But, they're really criticizing science, because I represent science.”

“This is a very, very dangerous sort of idea,” Sen. Paul said, warning of the dangers of a government-anointed “all-high priest of science” who can never be questioned:

“Well, it’s sort of a way of ending all debate. Because, if you attack him or have any debate over any his edicts or mandates, you're attacking science. This is a very, very dangerous sort of idea - the idea that a government bureaucrat represents science and that he is now untouchable.

It is sort of like you are now contradicting the all-high priest of science if you say anything.”

Dr. Fauci doesn’t tolerate debate about subjects like vaccine and mask mandates, because his edicts are “more about submission” than they are about science, Sen. Paul said:

“But, there are real questions, and there's real areas of science that he's never really debated, because he deflects. One area is: over 100 million Americans have had COVID. They have natural immunity. There's a real question about whether they should be vaccinated once, twice or not at all. And the thing is, there's never been any debate - because he's the all-powerful scientist, you're not to question him, just do as you're told.

“So, with him, it's more about submission. But, most of his edicts are not based in science.

“Whether kids should wear masks in school is a very debatable subject. It ought to be debated. In Sweden, no kids wear masks, 1.8 million kids, they haven't worn masks in school at all for the last two years, and they haven't had any deaths. What about the teachers? Turns out the teachers don't get COVID at a greater rate than the rest of public. So, it turns out, maybe we don't have to have our kids in masks.

“Should we have the debate? No, Dr. Fauci says he is the All-Powerful Oz and we shouldn't question him.”

“That is a real problem in a free country,” Sen. Paul warned.