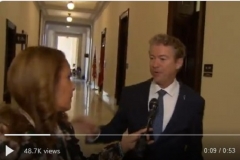 “It’s already made. We just have it through the red tape now,” Physician and Republican Kentucky Senator Rand Paul says, calling for a new Operation Warp Speed to speed the latest COVID vaccine to market.

“So, the real answer right now is probably allowing a new vaccine to come forward,” Sen. Paul said in an interview with Dana Loesch, in which he argued against the Biden Administration’s efforts to mandate that Americans receive an outdated vaccine as a booster:

“Instead, they’re wanting to sell you last year’s news – the old vaccine as a booster – but, it doesn’t really affect the Delta variant as well as the new one will. So, just like with the flu, we get a new vaccine in here, there is a Delta vaccine out there.

“And, what they should do – instead of trying to mandate that your newborn get a shot before they leave the hospital of a vaccine that’s now a year old – they should be following Trump’s predicate and doing an actual Operation Warp Speed for a new vaccine, a new Delta variant.

“It’s already made. We just have to get it through the red tape now.”

Excerpt from a long convo with @RandPaul yesterday and he makes a good point here related to mandated injections, which he doesn't support, and explains the genetic sequencing required for subsequent mutations absent Delta. https://t.co/3ru48cRjF7