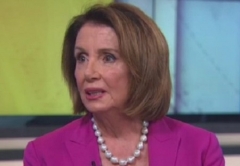 House Speaker Nancy Pelosi (D-Calif.), who supports legalized abortion, said at her press briefing on Thursday that she can use her "own judgement" on whether to take Holy Communion at a Catholic Mass.

At her weekly press conference, Pelosi confirmed a reporter’s claim that “U.S. archbishops and the Bishops Conference” don’t want priests to give her communion when she attends mass:

Asked for her “Reaction to that,” Pelosi said she is free to use her own judgment regarding whether to present herself for communion, and that she was “pleased” with a recent letter on the subject of pro-abortion Catholic politicians receiving communion the Vatican sent to U.S. bishops:

Speaker Pelosi:  “No, I think I can use my own judgment on that.  But I'm pleased with what the Vatican put out on that subject.  Did you read that?”

The letter, Pelosi said, did not leave the decision to individual priests, but simply said that bishops shouldn’t be “divisive on the subject”:

Reporter:  “It will be up to the individual priests?”

Speaker Pelosi:  “No.  It basically said, ‘Don't be divisive on the subject.’”

As CNSNews.com reported, Cardinal Luis Ladaria, prefect of the Vatican’s Congregation for the Doctrine of the Faith sent a letter on May 7 to U.S. bishops ahead of their June meeting on how to address the scandal of pro-abortion Catholic politicians receiving Holy Communion.

The letter urges the bishops to slow down, delay, and take more time to deliberate, then formulate a policy on the issue – “but only if this would help the bishops to maintain unity.”

"This Congregation notes that such a policy" today, "given its possibly contentious nature, could have the opposite effect and become a source of discord rather than unity within the episcopate and the larger Church in the United States," the letter warns.