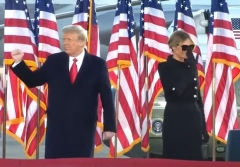 In his last public remarks as president, Donald Trump promised supporters that he and his team “will be back,” though he did not say how.

Before boarding Air Force One at Andrews Air Force Base, Pres. Trump made the cryptic claim while bidding farewell, at least for not, to his supporters:

Trump did not elaborate on what that form might be, but rumors have swirled that he might run again in 2024, either as a Republican or as a third-party candidate – a possibility Democrats hope to erase by their House impeachment and a Senate trial.

“We will see you soon,” Trump assured the crowd in his final words before boarding the plane:

"I want to thank all the great people of Washington, D.C., all of the people that we worked with to put this miracle together. So, have a good life, we will see you soon. Thank you."

Still, Trump said he had no regrets about the effort he and his team made to make America great again during his four years in office:

“We’ve left it all on the field. We’ll never say, in a month when we’re sitting in Florida, we’ll never look at each other and say, ‘If only we had worked a little harder.’ You can’t work harder, and we had a lot of obstacles.”