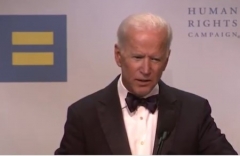 Now that House Speaker Nancy Pelosi (D-Calif.) has gotten her “total game‑changer: a new President and a vaccine” after refusing to compromise on a COVID-19 relief bill while Donald Trump was president, President Joe Biden now says there’s not “a second to waste” passing such a measure.

On Monday, Pres. Biden expressed the urgency in a Tweet:

“We don’t have a second to waste when it comes to delivering the American people the relief they desperately need. I’m calling on Congress to act quickly and pass the American Rescue Plan.”

In a December 4, 2020 press conference, Speaker Pelosi explained that Democrats had waited until after the election because they wanted “a new President and a vaccine.”

Q:  But what shifted, in your opinion, from when the Problem Solvers Caucus had a much larger bill a few months ago, you did not like that piece of legislation –

Q:  What has shifted now, when they're on board with this piece that's come out of the Senate?

Speaker Pelosi.  Perhaps you missed what I said earlier.  Joe Biden, committed to ending and crushing the virus and having a Build Back Better America initiative, Build Back Better.  A vaccine – answer to our prayers, an answer to our prayers – of 95 percent effectiveness in terms of Pfizer and Moderna, and there may be others coming forward.  That makes – that is a total game‑changer: a new President and a vaccine.

So, there's nothing to – these are different.  What was then, before, was not more of this.  This has simplicity.  It's what we've had in our bills.  It's for a shorter period of time, but that's okay now, because we have a new President – a President who recognizes that we need to depend on science to stop the virus, a President who understands that America's working families need to have money in their pockets in a way that takes them into the future, without any of the contraptions of any of the other bills that the Administration was associating itself with before.

“That was not a mistake, it was a decision,” Pelosi added.

In October, Pelosi engaged in a contentious interview with CNN’s Wolf Blitzer, who confronted her with a quote of her saying she didn’t want to give then-Pres. Trump the ability to put “a check mark” on his goal of passing a coronavirus stimulus bill before the election. Blitzer also noted that, even though Trump’s $1.8 trillion proposal didn’t have everything Pelosi, there was still “a lot there.”

“I'm asking you serious questions because so many people are in desperate need right now,” after Pelosi snapped at him for asking the questions and accused him of being a Republican apologist. “You really don't know what you're talking about,” Pelosi told Blitzer.

For months, House Speaker Nancy Pelosi held the line against a pared-down stimulus plan to prop up the coronavirus-hobbled economy. She insisted that Democrats needed to go big or stay stalled, arguing that this wasn’t the time for stopgaps or patchwork solutions.

“That was not a mistake, it was a decision,” Pelosi said of her choice to demand for months a deal three times as large as what she’s now settling for. “That is a total game changer — a new President and a vaccine.”