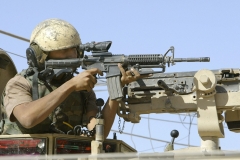 A new, national Rasmussen Reports survey finds that one in three (34%) likely U.S. voters believe that a second Civil War is likely.

Nearly one in ten (9%) said that it’s “very likely” that the U.S. will experience a second Civil War sometime in the next five years, while another 25% said that it’s “somewhat likely,” according to the survey conducted June 11 and 14, 2020.

The lowest-income voters were much more likely than the highest to believe a civil war is on the horizon, as 41% of those with annual incomes under $30,000 said they believe war is either somewhat (32%) or very (19%) likely. Among those with incomes of more than $200,000, 22% called it somewhat likely and only 4% said they think it’s very likely.

Protests and the removal of Confederate symbols, names, and monuments might not be the answer to avoiding a second Civil War, the survey suggests. While 37% of voters said “the current protests over the killing of an unarmed black man by police in Minneapolis” will “lead to long-term, meaningful racial change in American, 39% said that the removal of public reminders of the Confederacy would help race relations in the country.