Photo ID Required to Enter Businesses - But, Not to Vote - Due to DC Mayor Bowser’s New Mandate 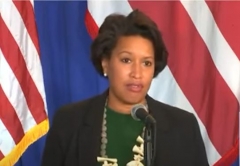 Democrat D.C. Mayor Muriel Bowser’s new COVID mandate requires people to show photo proof of identification in order to enter businesses – but, the Nation’s Capital does not require photo identification to vote, except in rare cases.

“Somehow, the Left wants you to believe it is racist to ask for photo identification to vote, but not discriminatory to ask for photo ID in order to enter restaurants, bars, movie theaters, or gyms in the name of COVID-19 safety,” The Daily Wire reports:

“On Saturday [Jan. 15, 2022], Democratic Mayor Muriel Bowser’s vaccine mandate is set to go into effect in Washington, requiring nearly every business and entertainment venue located in the nation’s capital to verify that patrons are vaccinated against COVID-19 with at least one shot. As part of that mandate for patrons over the age of 18, customers will have to show photo ID as proof their name matches the vaccination card they present for entry. Despite that, the District does not require photo identification for most voters with two exceptions.”

“Before patrons can access the indoor portion of the business, a business is required to check the patron’s proof of vaccination,” the D.C. government website detailing the mandate explains.

“In the past Democratic Party leaders and others in the media have suggested that requiring ID to vote is tantamount to enacting ‘New Jim Crow’ laws because they argue black Americans are less likely to have voter ID than their white counterparts,” The Daily Wire notes, citing comments by President Joe Biden and the American Civil Liberties Union (ACLU).

Last August, CNSNews.com reported that 81% of all voters nationally, including 77% of Black voters, support laws requiring voters to provide a photo I.D.

People entering the establishment to use the bathroom room or pick up a to-go item are exempt from the proof of vaccination/identification mandate, as long as they were “a well-fitted face covering.”