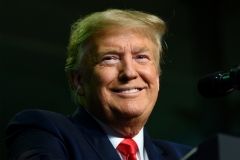 On Thursday, 40% said they strongly approve of Trump’s performance, tying the previous high last hit back in February of this year.

Trump’s total approval among U.S. likely voters on Friday also tied the highest mark of his presidency, hitting 52%, last reached on February 27th of this year before the coronavirus pandemic devastated the U.S. economy.

Women voiced slightly stronger approval of Trump than men on Friday – both in terms of strong approval (43% vs. 40%) and total approval (52% vs. 51%). Forty-five percent of blacks said they approve of Trump, with 35% saying they strongly approve.