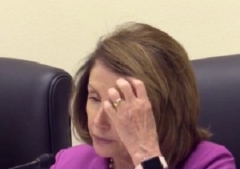 On Thursday, House Speaker Nancy Pelosi (D-Calif.) answered the question of why she thinks that 46% of Americans “thought it was okay” for Donald Trump to be president.

“It’s a sad situation” that 46 percent of Americans “thought it was okay” for Trump to be president, Speaker Pelosi said in an interview on MSNBC:

“I don't think the President has any idea of what the truth is.  I think that he thinks the truth is what he says, so it's a sad situation.  But you go back to what [Writer Jon Meacham] said, and Jon said, how can 46 percent, or whatever it is, of the American people have thought that was okay for him to be president?”

It’s “sad” that today’s Trump supporters are suddenly okay with the president’s “total disregard” for the Constitution, Pelosi said:

“But here's the thing that is really sad.  These people in our country, as I've traveled the country for years now, as Speaker, Leader and whatever, they've always respected the Constitution of the United States, whether they agreed with you.  Democrats, Republicans, different point of view, the Constitution was essential.

“Many of them took the oath to protect and defend it, and now, all of a sudden the total disregard that he has for the Constitution seems to be okay with them.  That's sad.”

While Pelosi warned MSNBC not to call Trump supporters uneducated, she said it’s useless to try to win over some of them – “and you know why”:

“Let's not characterize them as not educated.  They are educated.  They're educated in winning our wars, raising our families, building our communities and the rest.  And I think that the respect that they are owed and the commitment that we share to the Constitution can be a place where we can come together.

“Now, there's some of them we will never get - and you know why.  It's no use my going into that.

“But I do think that as we look at what this President might do to undermine the election, the Constitution, the election, the environment, fairness, who we are as a people, denigrating newcomers and the rest has been so destructive.  It's no use dwelling on that.  We just have to go forward.”