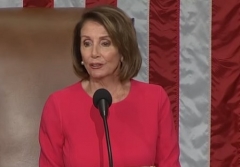 President Donald Trump “in his cowardice, his cruelty, his creepiness” - and supported by his band of “Whatevers” – is trying again to find a way to use an executive order to end the Deferred Action for Childhood Arrivals (DACA) program former President Barack Obama created “in his greatness,” House Speaker Nancy Pelosi (D-Calif.) said Tuesday.

“This President, again, in his cowardice, his cruelty, his creepiness, has decided he's going to go after the Dreamers again,” Pelosi said, advocating citizenship for illegal aliens in an interview with Telemundo.

Discussing a recent Supreme Court ruling that Trump has the authority to end DACA, but had gone about it the wrong way, Pelosi called the president “cruel” and “cowardly” for continuing his efforts to remove illegal aliens protected by Obama’s order:

“You know, I'm being very honest with you, Julio.  I'm not being very diplomatic.  I think that the President's action, in terms of DACA, has been cruel, has lacked compassion, it's been cowardly — afraid of these beautiful young people, the gold standard of people coming to our country, young and optimistic and the rest.  Thank God for their parents who brought them here.  We thank them for that.

“And for the Court to say that the President did it wrong, they didn't really actually strike it down.  They just struck down how he did it.”

“President Obama, in his greatness and his goodness, instituted DACA,” a program supported by “everybody” – except Republican senators, President Trump and his group of “Whatevers,” Pelosi said:

“And for him to say he would come back — 80 percent of the American people support our Dreamers.  They — over 70 percent think they should have a path to citizenship, and that's Democrats, Republicans, independents, everybody.  Everybody, except the President of the United States and some of his, shall we say, ‘Whatevers’ and the Republicans in the United States Senate.  The bill is there to protect them.  Let's get it done.

“But thank God the Court gave us this reprieve, even though it was only based on the manner in which the President did it, and not supporting the idea that President Obama, in his greatness and his goodness, instituted DACA.”

And, yet, Trump “in his cowardice, his cruelty, his creepiness, has decided he's going to go after the Dreamers again,“ Pelosi said.