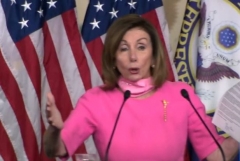 Pelosi was reading from a letter she had sent to President Donald Trump earlier in the day expressing concerns about “the increased militarization” of law enforcement efforts in the Nation’s Capital amid the violent protests and riots ravaging the city.

Pelosi reads from the letter, looks away from it for a moment – then loses her train of thought and stutters, unable to collect her thoughts, until she refocuses on the letter:

“Well, I preface it by saying, as you probably saw, there are military on the steps of Linc--of Lincoln Memorial. The…la…uh...the, uh–what is it?”

“I’ll read it to you,” Pelosi continued, returning to the letter.