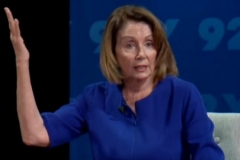 “This barrage of security came through, using clubs to beat people” Monday when the president walked over to the burned remains of St. John’s Church, House Speaker Nancy Pelosi (D-Calif.) said Wednesday, quoting her daughter.

Appearing on MSNBC’s “Morning Joe” program, Pelosi claimed President Trump’s visit to the church burned by rioters was “exploitation” of the feelings of Americans who believe in the Bible, but condemn the nation’s commander-in-chief:

“Many people are oriented toward religion, and faith-based organizations play a very strong role in our life.  But we have to be consistent.  We have to act upon our values.  And what happened the other night was an exploitation of the good feelings of the American people by associate themselves with the Bible and with the church, but not in any way in terms of his actions.”

Pelosi then claimed that she got a call Monday night from her daughter, a “filmmaker journalist,” who was at the scene. Her daughter, Pelosi said, told her that, even though the protesters were peaceful, White House security was “using clubs to beat people” and shooting them with “little bullets that explode into stuff that burns your eyes”:

“My daughter, Alexandra, a filmmaker journalist, was there that night and she called me and she said, ‘Mom, you wouldn't even believe it.  These people were demonstrating peacefully and, all of a sudden, this barrage of security came through, using clubs to beat people and these explosive little bullets that explode into stuff that burns your eyes.’”

And, even if it’s true that White House security didn’t actually use tear gas, as discredited liberal media reports initially claimed, “They had elements of it,” Pelosi said.

“What is this, a banana republic?” Pelosi asked:

“Maybe they didn't have tear gas, I don't know, but they had the elements of it - for peaceful demonstrators to make way, make way for the President to walk through.

“What is this, a banana republic?”