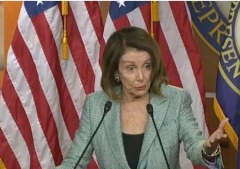 At her Thursday press briefing, Pelosi said “anybody that has any association with the truth” should “legitimize a conversation” with Trump:

“I don't think there should be any debates. I do not think the president of the united states has comported himself in a way that anybody that has any association with the truth, evidence, data, and facts - I wouldn't legitimize a conversation with him, nor a debate in terms of the presidency of the United States.”

“I thought what he (Trump) did in 2016 was disgraceful” and “he will probably act in a way that is beneath the dignity of the presidency. He does that every day,” Pelosi said. “I don’t think he should dignify that conversation with Donald Trump.”

Pelosi said Pres. Trump is attempting “to undermine the elections in the manner in which he is doing” – and twice accused him of “skullduggery”:

“Now, I know that the Biden campaign thinks in a different way about this, but I just thought what he did in 2016 was disgraceful, stalking Hillary Clinton like that. I was disappointed that the press didn’t say, 'Go back to your station. You’re not in on this stage; you have your own podium, she has hers.'

“So, I think that he will probably act in a way that is beneath the dignity of the presidency. He does that every day. But I think he will also belittle what the debates are supposed to be about, and they are not to be about skullduggery on the part of somebody who has no respect for the office he holds, much less the democratic process.

“Why else would he try to undermine the elections in the manner in which he is doing? So, if Joe Biden asks you what I thought about it, I don't think he should dignify that conversation with Donald Trump. You ask him any questions -- both of them. Just take their own stage for any number of conversations about any subject; hold them accountable. What are they proposing? What is their vision? What is their knowledge? How are they going to get it done? How do they connect with the American people? Let that be a conversation with the American people, not an exercise in skullduggery. Thank you all very much.”

Responding to Pelosi Thursday evening, White House Chief of Staff Mark Meadows told Fox News, "Well, the reason why she doesn't want a debate is because 47 years of rhetoric is all Joe Biden has versus four years of a real record that this president has.

Listen, I mean, it's obvious what they want to do. They want to try to hide the vice president of the Obama-Biden administration in a basement as long as they can so there's no tough questions, so that you don't get to ask the tough questions or anyone else in the hopes that they can hoodwink the American people.

Listen, let's have the debates, but even without the debates, this president's record will ultimately make sure that the people show up on November 3rd and reelect him.