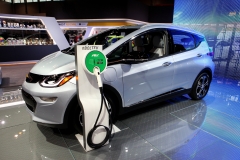 Under Democrats’ Build Back Better legislation, buyers would get a refundable tax credit of up to $12,500 for buying an electric vehicle – but, the only electric vehicle that would qualify for the full refund isn’t even being sold or in production, because battery fires sparked a recall.

GM temporarily pulled the plug on production of the Chevy Bolt in August. But, on Thursday, the manufacturer announced that it’s extending the halt in Bolt production at its Orion, Michigan assembly plant.

Bolt production was initially suspended in August. GM is now extending its suspension until January 2021, Reuters reports. The National Highway Safety Administration is currently conducting an investigation into the Chevy Bolt’s battery fires.

Ironically, Democrats’ “Build Back Better” legislation would give buyers a refundable tax credit of up to $12,500 on electric vehicles built in the U.S. by union workers, but the Bolt - which is not currently being sold or built - is the only electric vehicle that would qualify for the full tax credit, INSIDEEV’s explains:

“As part of President Biden's Build Back Better (BBB) legislation, which still has to pass the Senate, US EV buyers may get a refundable tax credit of up to $12,500 when they purchase a new EV. However, $4,500 is earmarked for EVs built in the US by unionized automakers. That said, there is not a single currently available EV in the US that would qualify for the full credit.

“Sure, the Chevrolet Bolt EV (and Bolt EUV) will qualify, though these are the only current EVs built in the US by union workers. and there's one massive caveat. Due to battery fires, the Bolt EV and Bolt EUV are not currently for sale, as GM isn't even producing them at this time.”

While Ford does have both an electric vehicle and unionized workers, its electric Mustang Mach-E is built in Mexico, not the U.S.

Conversely, Tesla produces in the U.S., but its workers aren’t unionized.