Ohio Sheriff Offers to Help Celebrities Leave U.S. if Trump Wins – On One Condition: ‘You Can’t Come Back’ 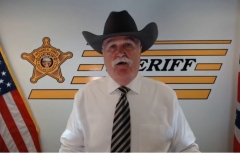 Celebrities and professional athletes are threatening to move out of the U.S. if President Donald Trump wins reelection – and Butler County, Ohio Sheriff Rick Jones is offering to help them do it – on one condition: they can’t come back.

These celebrities are ashamed of America, so if they want to leave, “Good for you.” Sheriff Jones says in a video posted on his Facebook page:

“These are mostly the same people who don’t like police, that don’t like first responders, so I feel obligated to make a response to that: good for you.

“I hope you do leave and if there’s any way I can help. I’m not a rich person, but I would be willing to throw in ten dollars to a special fund to help get you a flight or whatever it takes — a ship ride to whatever country of your choice — and, maybe, you can make a better life there in that country.”

“This is the greatest country in the world to live, regardless of who the president is,” Sheriff Jones says.

Celebrities promised to move out of the country if Trump won in 2016, but they didn't. So, Sheriff Jones is offering to chip in to help them leave this time, as long as they never come back:

“So, here’s what I’m doing. Again, the ones that promised, never left. I think they told us a lie.

“So, this time, those that are going to leave – the ‘special people,’ I call them – I hope you all the luck, and good for you. But, most of you can afford to leave, but if I put in ten dollars to help get you a ticket out of here, the rule is: you can’t come back. You have to stay there and make a better life for yourself, and, hopefully, you get along with that country, which you choose.

”So, I wanted to relay that message. Again, greatest country in the world to live, no matter who the president is. This isn’t a presidential issue, this is a United States issue. And, I love my country and I put my hand over my heart when they play the National Anthem and I stand.

“Those of you that don’t like it, leave. For some. And again, I will help fund that trip. You just can’t come back.”

“Thank you, and God bless all,” Sheriff Jones says.