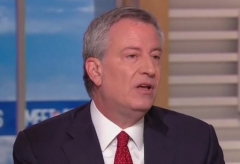 “The voluntary phase is over,” Mayor de Blasio declared Tuesday in an interview with MSNBC, deeming the Nice Guy approach a failure.

“We could not have been more kind and compassionate, as a country” but now “It’s time for mandates,” de Blasio said:

“We’ve got to shake people at this point and say, ‘Come on, now.’

“We tried voluntary. We could not have been more kind and compassionate, as a country: free testing everywhere you turn, incentives, friendly warm embrace.

“The voluntary phase is over. We can keep doing those things. I’m not saying shut it down. I’m saying voluntary alone doesn’t work.”

“It’s time for mandates, because it’s the only way to protect our people.”

Earlier this week, the mayor outlined a new effort to pressure all New York City employees to get vaccinated, The New York Post reports:

“On Monday, de Blasio announced that the entire city workforce will soon need to submit to weekly testing if they are not inoculated against the coronavirus. Additionally, city officials said the city, beginning Aug. 2, will require unvaccinated city workers to wear a mask at their workplaces — or face removal from them and suspension without pay.”