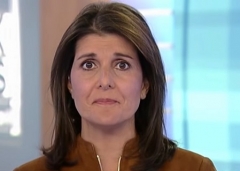 Despite the Biden Administration’s claims that it has “leverage” over the Taliban that it can use to rescue Americans and U.S. allies from Afghanistan, it clearly doesn’t, former U.S. Ambassador to the UN Nikki Haley says.

In a Fox News Channel interview on Sept. 1, Haley discussed scenes from Afghanistan of Taliban sporting coffins covered with American flags. She said the images are proof that the Biden Administration shouldn’t be trusting the jihadist regime that was supposed to be guarding the airport where American soldiers were killed by a suicide bomber:

“You don’t have caskets with an American flag and claim to have leverage, because they don’t.”

Haley also criticized the Biden Administration for misrepresenting and understating the plight of those still trapped and at the mercy of the Taliban: