Nikki Haley: ‘Our Mayors Have Lost Control and Given in to Lawlessness’ – ‘That Doesn’t Happen Overnight’ 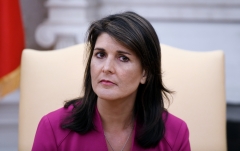 The riots, looting and vandalism ravaging some of the nation’s largest cities is continuing because the cities’ mayors have lost control of the violence and destruction and simply chosen to accept it, former U.S. Ambassador and Governor Nikki Haley says.

Instead, a period of “permissive leaders, bad policies and a culture that dismisses personal responsibility” set the stage for the current violence and destruction continuing unchecked, Haley says in her post:

“From Chicago to New York to Portland, our mayors have lost control and given in to lawlessness. This kind of disrespect for human life and property doesn’t happen overnight. It comes from permissive leaders, bad policies, and a culture that dismisses personal accountability.”

Over the weekend, 60 people were shot in Chicago and D.C, and hundreds of looters smashed store windows and stole merchandise in Chicago, CNSNews.com reported on Monday. And, in New York City, the murder rate has more than doubled over the past month, prompting Black Leaders to call for the return of the city’s disbanded Anti-Crime Unit.