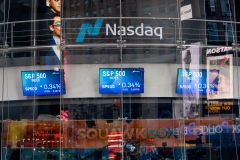 Nasdaq has asked the Securities and Exchange Commission (SEC) for permission to punish more than three thousand companies listed on its U.S. stock exchange if they don’t report and defend the makeup of their boards – and meet Nasdaq-mandated “diversity” quotas.

“Nasdaq is pushing for the more than 3,000 companies listed on its U.S. stock exchange to make their boardrooms less male and white,” the Associated Press (AP) reported on Tuesday.

Companies that fail to comply with Nasdaq’s diversity reporting demands could be either delisted or removed from the exchange, if the SEC approves the proposal, AP explains:

“The company filed a proposal Tuesday with the Securities and Exchange Commission that, if approved, would require all companies on the exchange to disclose the breakdowns of their boards by race, gender and sexual orientation. Companies that do not comply could be delisted, or kicked off the exchange.”

“The proposal would also require most Nasdaq-listed companies to have at least two diverse directors or, if they cannot meet the mandate, to explain why not. That could include one board member who is female and one who is either an underrepresented racial minority or LGBTQ.”