MSNBC Has Been Attacking Parental Rights, in Favor of ‘Collective Notion’ that ‘Kids Belong to Whole Communities,’ Since 2013 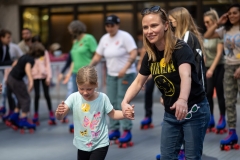 While MSNBC continues to smear and misrepresent Florida’s new “Parental Rights in Education” law – even going so far as to call it a “terror tactic” – the network’s propaganda calling for parents to have less say in how their children are raised is nothing new.

As far back as April of 2013 MSNBC has been touting a “collective notion,” rather than a “private notion” of raising children.

In the MSNBC advertisement, Perry said, “We have never invested as much in public education as we should have because we’ve always had kind of a private notion of children: your kid is yours and totally your responsibility. We haven’t had a very collective notion of these are our children.”

“Once it’s everybody’s responsibility and not just the household’s, then we start making better investments,” Harris-Perry concluded.

“This is shredding the notion of family, replacing it with the commands of the state,” Media Research Center President Brent Bozell said at the time, responding to Harris-Perry’s comments.

“MSNBC has awarded itself a new acronym: My Son Needs to Belong to the Collective. How do you sell a private network with this dreadful collectivist advertising?” asked Bozell.

Bozell was not alone in condemning Harris-Perry’s comments.

“An MSNBC contributor revisits the statist notion that while you gave birth to your children and feed and clothe them, they are only on loan to you by their true parent — a benevolent and all-knowing government.

“Melissa Harris-Perry, an African-American professor at Tulane, has endorsed the concept of human ownership by the state, something we thought history would teach her is a bad thing.”

The editorial goes on to recall a quote attributed to Adolf Hitler:

“One well-known collectivist echoed such sentiments when he said, ‘Let me control the textbooks and I will control the state. The state will take youth and give to youth its own education and its own upbringing. Your child belongs to us already... what are you?’”

“Of course, if as Harris-Perry holds, ‘[t]he cost to raise a child [is] $10,000 a year up to $20,000 a year,’ and if children should be viewed as collectively ‘owned’ by ‘society,’ then taken to its logical extension, a woman's choices about having a child should be informed by the economic considerations of the ‘community,’ would it not? But of course, that logic would take someone to justify, for example, the ‘one-child’ policy in Communist China.

“What's more, the notion of collective responsibility for children was a philosophy that undergirded the Cultural Revolution in Communist China under Chairman Mao. I bring that up because, as you may recall, another Harris-Perry "Lean Forward" spot contains a reference to a ‘great leap forward,’ which calls to mind the disastrous agricultural reform plan which starved millions of Chinese to death in the 1950s.”