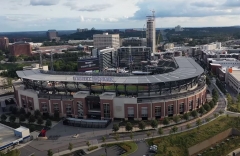 Major League Baseball (MLB) announced Friday that it is pulling this year’s All-Star game out of Atlanta because of President Joe Biden’s criticism, which has been proven false, of Georgia’s new law cracking down on voter fraud.

MLB made the announcement in a press release parroting Biden’s unfounded claim that Georgia’s new law will “restrict voting access”:

“Major League Baseball announced on Friday that it will relocate the 2021 All-Star Game and Draft, originally scheduled to take place in Atlanta, to a to-be-determined location.

“The decision comes a little more than a week after the passage of SB 202, a Georgia law that President Biden criticized earlier this week, saying that it will restrict voting access for residents of the state.”

MLB Commissioner Robert D. Manfred, Jr. says his decision is a means for MLB to “demonstrate our values.” The commissioner says he talked to current and former players before making his decision, but doesn’t say that he spoke with any of the state’s elected officials in an effort to verify Biden’s accusations:

“Over the last week, we have engaged in thoughtful conversations with Clubs, former and current players, the Players Association, and The Players Alliance, among others, to listen to their views. I have decided that the best way to demonstrate our values as a sport is by relocating this year’s All-Star Game and MLB Draft.”

“Look, don’t just believe me, go fact-check it for yourself. Look at a lot of the things,” Gov. Kemp said, urging Americans to actually read the bill to see the truth about what’s in it.