Mich. Gov. Whitmer Apologizes for Violating Her Own Coronavirus Rules: ‘We Didn’t Stop to Think About It’ 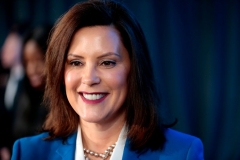 “We didn’t stop to think about it,” Democrat Michigan Governor Gretchen Whitmer said after a photograph surfaced of her violating her own coronavirus restrictions at a restaurant over the weekend.

The photograph was obtained exclusively by Breitbart.com, which broke the news:

“Whitmer and a large group of friends, including her appointed chief operations officer, Tricia Foster, visited the Landshark in East Lansing, violating her restaurant orders in the process, according to a photo one of the attendees posted on Facebook.”

“While Whitmer’s group did not wear masks, a bouncer at the Landshark — a dive bar in the college town — could be seen with his face covered.”

“We didn’t stop to think about,” Gov. Whitmer says in her apology, reported by The Detroit News:

“’Throughout the pandemic, I’ve been committed to following public health protocols,’ Whitmer said Sunday in a statement. "Yesterday, I went with friends to a local restaurant. As more people arrived, the tables were pushed together. Because we were all vaccinated, we didn't stop to think about it.

“’In retrospect, I should have thought about it. I am human. I made a mistake, and I apologize.’”

The incident isn’t the governor’s only recent scandal. Whitmer “was hit with a recent ethics complaint after allegedly accepting a discounted private jet trip to Florida while cautioning residents against leaving the state,” Fox News reports:

“Whitmer has come under scrutiny for using a jet owned by prominent business executives and largely covering the cost with Michigan Transition 2019, a nonprofit fund that was initially established for inauguration events. The tab was $27,521, with Whitmer personally paying $855 of that amount.”