Mexican President: So Many Americans Are Crossing the Border to Buy Our Cheaper Gas That We’re Doubling the Fuel Supply 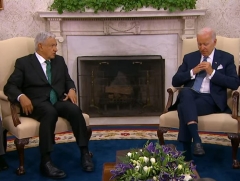 The president of Mexico says that so many Americans are crossing the border into his country to save money on gas, that he’s doubling the fuel supply at gas stations near the border - and putting “over 1,000 kilometers of gas pipelines” at President Joe Biden’s disposal.

In a White House meeting with Biden on Tuesday, Mexican President Andrés Manuel López Obrador explained how he’s helping out while the American people are waiting for the Biden Administration to do something about high gas prices:

“In the meantime, while we’re waiting for prices to go down, we have decided that it was necessary for us to allow Americans who live close to the borderline so that they could go and get their gasoline on the Mexican side at lower prices.”

“And right now, a lot of the drivers — a lot of the Americans — are going to Mexico, to the Mexican border, to get their gasoline,” López Obrador said, noting that the price of a gallon of gas is more than a dollar and a half less expensive in Mexico:

The Mexican president said that he’s committed to doubling the supply of fuel in order to accommodate the needs of cost-conscious American border-crossers:

“However, we could increase our inventories immediately.  We are committed to guaranteeing twice as much supply of fuel.  That would be considerable support.”

“California, which borders Mexico, remains one of the most expensive states for gas, at more than $6 per gallon, according to AAA. In Texas, the average is about $4.20,” according to The New York Post.

Pres. López Obrador also touted Mexican gas pipelines, which he offered to put “at the disposal” of Pres. Biden, in order to provide relief to Americans in southwest border states:

“We are putting at the disposal — or sending at the disposal of your administration over 1,000 kilometers of gas pipelines throughout the southern border with Mexico to transport gas from Texas to New Mexico, Arizona, and California for a volume that can generate up to 750 megawatts of electric energy and supply about 3 million people.”