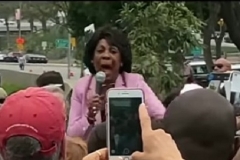 “Every day we have seen this nation get more racist than anybody thought perhaps would be at this point in time,” Rep. Waters said, responding to Sen. Scott, in an interview with Inside California Politics.

Even Americans who didn't think the U.S. is racist now know that it is, Waters claimed:

“It’s kind of unexpected that he would be so, you know, adamant in the way that he said it: ‘This is not a racist country.’

“I think that even some people who did not think so in recent years are now understanding that it is, and that we have got to deal with it, we have got to do something about it.”

Rep. Waters solution: legislation “in all aspects of our government” to put an end to the country’s “systemic racism”:

“And public policy is extraordinarily important in all aspects of our government to begin to legislate in ways that will do away with the exclusion, the undermining that has really put racism into the system – systemic racism.”

Waters blamed former President Donald Trump for taking the nation “backward” and repeated the baseless claim that Trump had identified himself with radical groups, such as the Ku Klux Klan:

“He (Trump) was making racist comments. He was identifying himself with people like the Ku Klux Klan and the Proud Boys and the Oath Keepers and the QAnon.

“I mean, that is racism defined in the most obvious way. And so to say that this is not a racist country, maybe he (Scott) meant to say that there are many people who are not racist in this country. But yes, we have a problem with racism and that we must work to do something about it.”