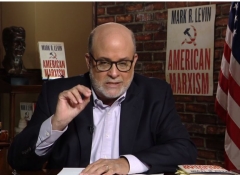 Mark Levin’s new book, “American Marxism,” has topped the New York Times bestseller list in each of its first two weeks since publication, giving the conservative commentator and constitutional scholar his seventh #1 bestseller.

“American Marxism” sold just over 157,000 in its second week, making it number one in the NYT’s hardcover nonfiction category and the number two seller on Amazon. The book has total combined sales of 565,100 (hardbacks, ebooks, audio) and is among Levin’s most timely and important works, The Washington Examiner reports:

“The book is one of Levin’s most readable and urgent. In it, he calls for a new movement to stop liberals from destroying American traditions and politics.”

The Biden Administration’s policies, on everything from immigration and Critical Race Theory to climate change and transgenderism, are deeply rooted in Marxism, Levin explained in an exclusive interview discussing the book with Media Research Center President Brent Bozell:

“This stuff wasn’t just developed today - this stuff comes straight out of Marx and Engels. It is Americanized, it is altered. It may not be technically, exactly the same thing. But, fundamentally, it is.”