Mark Levin: ‘This Is a Stalinist Show-Trial – Google It, DuckDuck It, Bing It – Go See What I Mean’ 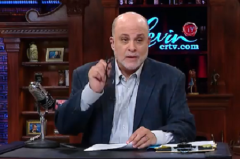 Not since the Salem Witch Trials has the U.S. seen such a one-sided prosecution of Americans who aren’t allowed to defend themselves, Constitutional Scholar Mark Levin said Wednesday, commenting on the Democrats’ Jan. 6 Select Committee investigation and hearings into the 2021 Capitol riots.

On the eve of Thursday’s nationally-televised hearing designed to smear, vilify and criminalize former President Donald Trump and select Republicans, Levin made his case during an appearance on Fox News Channel’s “Hannity”:

“Never in American history, except maybe the Salem Witch Trial, have we had a court of law, or more recently, a Congressional hearing with just one side. Just one side.

“The purpose of a hearing is to get information, not to put on a Hollywood spectacle.”

“This is a Stalinist show-trial. Google it. DuckDuck it. Bing it. Go see what I mean,” Levin said.

The Jan. 6 committee is violating the Constitution’s defined separation of powers, as well as the Bill of Rights, by exceeding its authority to conduct a criminal investigation, Levin explains:

“Why are there 11, I’m told, federal prosecutors on the staff of this committee?

“The Constitution has separation of power: the Executive Branch handles criminal investigation.

“Why are there 11, or whatever the hell the number is, former federal former prosecutors on this committee? What, too violate the Bill of Rights and the rights of those people who are called in to testify? Yeah, that’s exactly what is going on here.”

Levin said that, when Republicans take over the House, “I hope they will investigate this committee; I hope that they will subpoena Nancy and Hoyer and all the rest” of the Democrats who actually did make threats and encourage unlawful protests intended to influence Supreme Court justices.