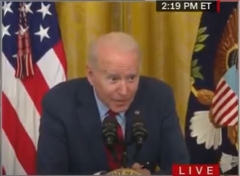 President Joe Biden has added one more exaggeration to his growing list of embellishments.

Last Tuesday, Pres. Biden claimed that he “had a house burn down with my wife in it” and, then, that “a significant portion of it” burned.

But, the local fire company chief told the Associated Press (AP) at the time that “the flames did not spread beyond the kitchen.”

In last week’s speech touting his infrastructure bill, Biden made the following claim:

“Without this bridge, as I said earlier, it’s a 10-mile detour just to get to the other side.

“And I know, having `had a house burn down with my wife in it — she got out safely, God willing — that having a significant portion of it burn, I can tell: 10 minutes makes a hell of a difference.  It makes a big difference.

“Folks, every mile counts, every minute counts in an emergency.”

But, as the Associated Press reported at the time, it was “a small fire that was contained to the kitchen”:

“Lightning struck the home of Sen. Joseph Biden, starting a small fire that was contained to the kitchen.”

“Firefighters arrived to find heavy smoke coming from the house, but were able to keep the flames from spreading beyond the kitchen, said Cranston Heights Fire Company Chief George Lamborn.

As Fox News reports, Biden’s past dubious claims include: