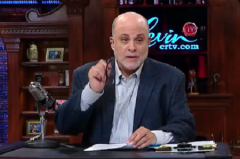 Constitutional Scholar Mark Levin says that President Donald Trump definitely has the authority to override governors refusing to allow churches to reopen, as Trump has promised he would, as the coronavirus pandemic lingers.

Since the U.S. Constitution is a federal document, the Supreme Court has applied its protections to states in the past, Levin explained Tuesday in the first of three tweets addressing the issue:

“The free exercise of religion is part of the First Amendment of the FEDERAL constitution, which the Supreme Court has applied to the states along with the rest of the Bill of Rights.”

Thus, as the head of the executive branch, Pres. Trump has the authority to direct the Justice Department to protect civil liberties, such as religious liberties, Levin followed up:

“If the president, as the head of the unitary executive branch, believes a governor is violating the religious liberty rights of the citizenry, he can direct his Justice Department to act.  It’s a recognized civil liberty like other individual human rights.”

In his third tweet, Constitutional Scholar Levin warned his followers not to listen to all the fake news and ignorant professors claiming that Trump does not have the authority to defend the First Amendment guarantee of religious freedom:

“There’s lots of phony reporting and silly professors who’ve no idea what they’re talking about.”

On Tuesday, Pres. Trump promised to override governors who try to prevent churches and synagogues from reopening safely, CNSNews.com reports:

“If they want to play games, that's okay, but we will win, and we have many different ways where I can override them, and if I have to, I'll do that, but we want our churches and our synagogues and our mosques et cetera, we want them open,” the president said.