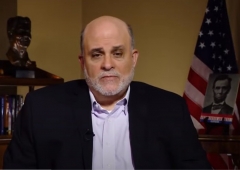 When politicians support the Black Lives Matter organization, “They are embracing a Marxist, anarchist organization that is extremely well-funded, heavily-funded and extremely well-organized all over the country,” conservative commentator Mark Levin says.

“It’s almost like the Weather Underground except, smartly, they’re using race as the issue through which to push their Marxism,” because Marxists advocate using any means necessary to achieve success, Levin said in a Tuesday interview with BlazeTV.

“So, it’s a Marxist, anarchist movement that has as its goal to overthrow the country and to get Trump out. Think about that,” Levin said.

What’s more, liberal politicians aren’t denouncing the anarchist movement because “This is a piece of the base of the Democratic Party, now,” Levin said.