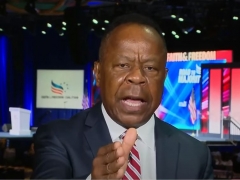 Store owners “cannot win in California, because criminals are allowed to commit crimes and prosecutors are looking the other way” due to “The George Floyd Effect,” former Civil Rights Attorney Leo Terrell said Thursday.

In an interview with Fox News, Terrell discussed the shoplifting sprees plaguing San Francisco businesses – including a viral video of a thief at a Walgreens filling a trash bag with merchandise and leaving while a security guard stood by and watched.

“You live in that state. What’s going on with this guy walking out with a bag full of stuff in the middle of the day on his bicycle in a Walgreens?” Host Bill Hemmer asked.

Criminals are free to run wild, because both police and prosecutors are afraid of being accused of abuse after high-profile case of George Floyd, who died while in police custody, Terrell replied:

“This is the George Floyd effect. Criminals are allowed to commit crimes because we don’t want a George Floyd situation. Democratic prosecutors are not prosecuting criminals.”

“So, you cannot win in California, because criminals are allowed to commit crimes and prosecutors are looking the other way – it’s the George Floyd effect.”

One reason store owners in California can’t win, Terrell said, is that, if items are out in the open on shelves, they’re easy to steal – but, if they’re behind a display window, the business is accused of being racist:

“And let me also mention this: he just grabbed those items. If you locked up those items with a display window, you’re being accused of being racist.”

“San Francisco’s reaping what it sowed,” Fox News Contributor Geraldo Rivera added. “When we break the rules and there are no consequences, then you descend into chaos. You descend into anarchy.”