Kristi Noem: ‘It Wasn’t Fun Getting Kicked in the Head Every Night by Liberal Media’ – But, It Was Worth It 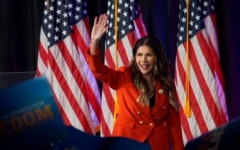 Even though she was “kicked in the head every night by the liberal media” during her campaign, Republican South Dakota Governor Kristi Noem said she doesn’t regret it, after winning reelection in last week’s midterms.

In a video posted on Twitter Thursday, Gov. Noem said that enduring the media’s abuse was worth it, in order to do “the right thing” during the COVID pandemic.

It would’ve been easier for South Dakota to fall in line with other governors who imposed lockdowns and issued vaccine mandates – but, that would’ve meant living in fear – Noem said:

“We could’ve complained about the difficult choices that were in front of us. And, frankly, it would’ve been easier to complain, to follow the path, to do what everybody was doing – to live in fear, to shut down our states and our communities.

Noem said that, after learning all she could about the virus, she went out and told the public what she had discovered, then “trusted them to exercise their personal responsibility to do the right thing” and “knew that we would get through this together.”

“There were hard days,” Gov. Noem said of her campaign, which she ended up winning by a 27-point margin with 62% of the vote - despite relentless attacks by liberal media:

“And, it wasn’t fun to get kicked in the head every single night by the liberal media and the national news – but, it was the right thing to do. It was right to follow the Constitution. It was right to defend freedom.”