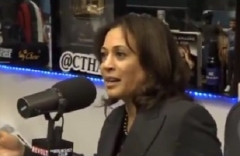 The California Democrat referred to what “a Harris administration” will do if Biden wins the presidency in November.

Sen. Harris was taking part in a virtual roundtable with small business owners in Arizona when she revealed her plans for “a Harris administration”:

As WDBD Fox 40 reports, Sen. Harris’ comment ignited a social media frenzy accusing Harris of a “Freudian slip” based on the belief that she’ll actually be the one running the show if Biden wins the White House:

Many on social media questioned whether Harris’ misstatement was a “Freudian slip” as critics of the Biden candidacy insist that former VP is a placeholder for the liberal senator.

“President Trump and his supporters have repeatedly attacked Joe Biden as being a “Trojan Horse for the radical left” while other critics have predicted that the former VP is serving as a “placeholder” until Harris is sworn in as president.”