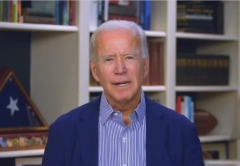 “In the 2020 Census, which is now two Censuses ago--soon to be,” Biden said, apparently referring to the 2000 Census. The Census is required by law to be conducted every 10 years.

Biden made the claim in an interview with UnidosUS Action Fund posted to the former vice president’s YouTube page. Biden, who was arguing that the Latino population has grown and been accepted in Delaware, did not correct himself, but continued making his point:

“If I can interject one thing here: When you and I first met, we had a relatively small population, and we called it at the time a Hispanic population, mostly Puerto Ricans, American citizens already.

“And you remember in the early days, I won’t go into it all because you don’t have time, but back in the days when one of the things that was going to, quote, cost me an election as a young senator, was my support of the farm workers, which was a big agricultural state. Well, guess what, they’re being embraced in Delaware now. It’s not being pushed away. They’re saying, ‘Come.’”