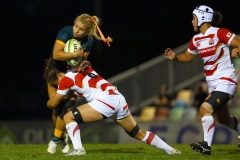 Biological males, who have “transitioned” to identify as females, have been banned from competing against biological women in the high-contact sport of rugby, the International Rugby League announced Tuesday.

“Transgender players have been banned from women's internationals while rugby league's governing body does further research on its inclusion policy,” BBC.com reports:

“In guidelines published on its website, World Rugby said transgender women could not play women's rugby ‘because of the size, force and power-producing advantages conferred by testosterone during puberty and adolescence, and the resultant player welfare risks this creates’.”

As a result of the new policy, transgender women will not be allowed to compete in this year's women’s rugby World Cup games, which begin in October.

The decision to protect female athletes from unfair, and potentially harmful, competition by biologically-born males isn’t the first, and might not be the last, an article in The Mirror explains:

“The IRL announced the change on Tuesday but said it will use this year's Rugby League World Cup ‘to implement a formal transgender inclusion policy.’ For the time being, however, the new rules will prevent transitioned players from competing in women's Test games.

“The decision reflects a recent trend among senior sports bodies that have revised their policies in regards to trans participation. IAAF President Seb Coe has suggested athletics could follow FINA —the world's governing body for swimming—by barring trans athletes from women's competitions.”