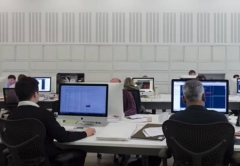 The unemployment rate for Hispanics and Latinos improved for the sixth consecutive month in October as the nation’s businesses continued reopening from the coronavirus-prompted shutdown.

The 8.8% national, seasonally-adjusted unemployment rate for Hispanics and Latinos in October fell by 1.5 percentage points from September’s 10.3% level and 10.1 points from the record-high of 18.9% set in April, continuing to approach March’s 6.0% pre-shutdown mark.

October’s unemployment rate dropped even as more Hispanics joined the labor force, as the number employed grew by 785,000 and the ranks of the unemployed fell 397,000, the U.S. Bureau of Labor Statistics (BLS) reported Friday. BLS began tracking Hispanic-Latino employment data in 1973.

A Pew Research Center poll conducted July 27-August 2, 2020 found that the economy was the most important issue influencing how Hispanics would vote in November, with eight in ten declaring it the top issue this election season.

As it turned out, exit poll results show than approximately one in three Hispanics voted for President Donald Trump in Tuesday’s election. Among all minorities, Trump gained the highest share of votes of any Republican presidential candidate since 1960.