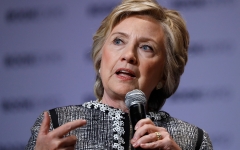 Hillary Clinton, who lost the 2016 presidential election despite winning the popular vote, cast an electoral vote for Joe Biden on Tuesday – then, called for abolition of the Electoral College, which cost her the presidency.

Clinton added that she was proud to cast her vote for Biden, since that’s currently how presidents are elected:

“But while it still exists, I was proud to cast my vote in New York for Joe Biden and Kamala Harris.”

Both the former secretary of state and her husband, former President Bill Clinton, voted as electors for New York, Yahoo! News explains:

“Clinton, along with her husband, former President Bill Clinton, and New York Governor Andrew Cuomo, was part of the state’s 29 electors to cast a vote for Biden Monday as electors in every state and the District of Columbia met to formalize Biden’s election win.”

Conservatives fear that a Biden Administration will not only abolish the Electoral College, but also expand the number judges on the Supreme Court and end the Senate filibuster.