Herschel Walker: If You Want to 'Build Back Better,' Then You Need to 'Know Who You’re Building It for - and Why' 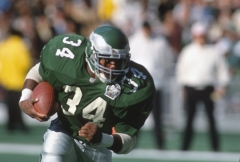 Former college and pro football star Herschel Walker says Americans need to rethink what it means to “Build Back Better,“ in a video taking on the Democrats’ $1.75 trillion social spending and climate bill.

“A few things to think about as we start the New Year!” the former college Heisman Trophy winner, NFL star and Georgia Republican Senate candidate tweeted on January 1, introducing a video in which he lays out the actions necessary to actually “build back better,” which the title of the Democrats’ bill claims the measure will do to America.

If Americans truly want to build a better country, they need leaders who will do the exact opposite of what Democrats are doing, and seek to do, to the nation regarding issues like the police, the military, energy and the rule of law, Walker says:

A few things to think about as we start the New Year! God Bless All pic.twitter.com/sUNKpoCALh

“If you want to build back better, first you probably want to control the border, because you want to know who you’re building it for, and why.

“Then, you probably want to protect your military, because they’re protecting you against people in other countries that don’t like you.

“You want to fund the police, though, so they have better training, better equipment to protect the law of the land – because you don’t want people just doing whatever they want to do.

“Build back better: you probably want to become energy independent – otherwise, you’re going to depend on other countries for your livelihood.