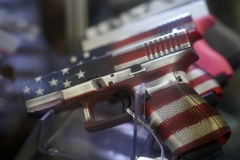 In May, U.S. firearm sales surpassed one million for a record 34th straight month, as Americans sought protection from mass shootings - as well as from politicians pushing for more laws infringing on citizens’ gun rights.

As The Washington Examiner reports, history suggests firearms sales will continue to surge:

“In a record-breaking trend that appears to have no end in sight, sales of civilian guns have topped 1 million for 34 straight months.

“The FBI this week said that background checks for May totaled 2,349,383, the third-highest ever for a May. Of those, industry officials said that about 1,174,791 were directly tied to the sale of a firearm.”

“If past buying trends hold, the ‘mass shootings’ over the past week in Buffalo, New York, Uvalde, Texas, and Tulsa, Oklahoma, will spark more sales to those looking for self-defense.”

"The tragic events in Buffalo, New York, and Uvalde, Texas, are sobering reminders that there are those in our society who have no respect for the law or innocent lives,” Mark Oliva, spokesman for the National Shooting Sports Foundation told Newsmax. “Every law-abiding adult American has the right to defend themselves and their loved ones against that evil."

“Some states have reportedly dropped requirements of certain adults needing a permit to carry a concealed weapon. With at least 25 states, it is now known as ‘constitutional carry,’" Newsmax reports.

“In an irony of the ongoing gun debate, gun sales often increase as a direct result of political campaigning against them, a trend that has been increasing along with the frequency of mass shootings in the United States.”