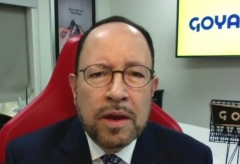 Americans shouldn’t rely on media, Big Tech or government to control their lives, because they need to focus on God, Goya Foods President and CEO Robert Unanue said Friday.

In an interview on Fox News Channel, Unanue criticized government shutdowns of the economy, saying they “kill our spirit”:

Unanue then warned of the Cancel Culture’s efforts, led by social media giants, media and government “to cancel God” in order to boost their own influence and power:

“We need to not move away from God; we need to move closer to God.

“We cannot move away from God. We’ve need to love and to build, not hate and destroy.”

Paraphrasing the Pledge of Allegiance, the Goya CEO said that America can’t be “one nation indivisible” without God:

“Some of us want to be ‘one nation indivisible’ – you can’t be indivisible without God. We have to pray, we have to have hope, and we have to move closer to God. Otherwise, it’s not a pretty picture.”