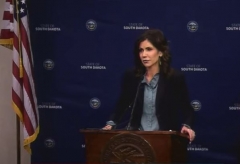 On Tuesday, Republican South Dakota Governor Kristi Noem released the text of draft legislation to defend fairness in girls’ sports at both the K-12 and collegiate level, after having vetoed a similar bill back in March.

“Common sense tells us that males have an unfair physical advantage over females in athletic competition. It is for those reasons that only girls should be competing in girls’ sports,” Gov.  Noem said, announcing the draft of her bill.

“Women have fought long and hard for equal athletic opportunities, and South Dakota will defend them, but we have to do it in a smart way,” Noem said, alluding to what she considered the “problematic provisions” in the bill she vetoed earlier this year:

“This legislation does not have the problematic provisions that were included in last year’s House Bill 1217. Those flawed provisions would have led to litigation for our state, as well as for the families of young South Dakota athletes – male and female alike.”

The new draft legislation says that only students identified as female on their original, official birth certificates can participate in “any team, sport, or athletic event designated as being for females, women, or girls.”

As CNSNews.com reported at the time, in March, Gov. Noem vetoed a bill she had previously declared that she was “excited to sign”:

“HB 1217, the Fairness in Women's Sports Act, is the bill that Gov. Noem vetoed on Mar. 19, despite tweeting on Mar. 8 that she was ‘excited to sign this bill very soon.’ Noem reportedly vetoed the bill because of pressure from the South Dakota Chamber of Commerce, South Dakota Board of Regents, and multi-national corporations such as Amazon.”

Noem was quickly and harshly rebuked following her about-face, with 47 pro-family, conservative organizations publishing a letter accusing her of sending female athletes “back to the sidelines”:

"Gutting the bill doesn’t help anyone win—it sends South Dakota and their girls and women back to the sidelines and sends the wrong signal to others across the country in the fight to save girls’ and women’s sports."

“I returned the women's sports bill to the legislature because we have to pass a bill that can win in court,” Gov. Noem explained in a commentary responding to her critics published in National Review.

“As passed, this bill was a trial lawyer’s dream. It would have immediately been enjoined had I signed it into law, meaning that no girls in South Dakota would have been protected,” Noem wrote.