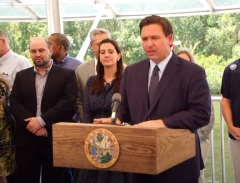 Republican Florida Governor Ron DeSantis is vowing to fight back if the Biden Administration goes through with its threat to deny school lunches to schools that refuse to implement woke gender ideology.

“We’re prepared for what Biden throws our way.

And, you know, yes, part of it’s the inflation and the gas — part of it are intentionally destructive policies like trying to deny school lunch programs for states that don’t do transgender ideology in the schools, I mean, give me a break!”

Biden is “totally off his rocker to be doing that,” DeSantis says in the video. “We’re fighting on that, don’t worry. So, we’re just prepared to be able to defend the taxpayers and the hard-working people in the state of Florida, and I couldn’t be prouder for doing that.”

“In early May, the USDA announced that K-12 schools would be at risk of losing federal funding for free-and-reduced price meal programming if they do not adhere to federal LGBTQ+ inclusivity policies,” USA Today reports.

The USDA’s proposed rule would cut off school lunch funding to public schools that prohibit transgender youth from participating in sports or using gender-designated bathrooms of their choice.

DeSantis isn’t the only Republican governor promising to fight back against Biden’s use of coercion tactics to inflict gender ideology on school children, the Daily Wire reports:

“’President Biden is holding lunch money for poor Americans hostage in pursuit of his radical agenda,’ Noem said in a statement Thursday morning. ‘He is insisting that we allow biological males to compete in girls’ sports or else lose funding for SNAP and school lunch programs.’”

Asked whether it would withhold funding, the USDA issued a statement saying that the agency is “rooting our discrimination in any form” and that it will handle any discrimination of LGBTQ people as sex discrimination, AP News reports.

No lawsuit against the proposal may be filed until the policy is finalized. It is currently open for public comment and review.