Gov. Cuomo: 'We Had This European Virus Attack Us;' 'Everybody's Looking at China and the Virus Is Coming from Europe' 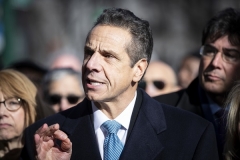 During his coronavirus update, Gov. Cuomo said that since Europeans visited China, then traveled to New York, that “We had the virus that attacked us from Europe”:

“And you know what? No one knew. No one knew with all the sophistication, with all the public health organizations, with that whole alphabet soup of agencies, nobody knew the virus was coming from Europe.

“Everybody's looking at China, and the virus is coming from Europe.

However, back on March 1, 2020, Gov. Cuomo reported on his website that "the first positive case" in New York was a woman returning from Iran:

"This evening we learned of the first positive case of novel coronavirus — or COVID-19 — in New York State. The patient, a woman in her late thirties, contracted the virus while traveling abroad in Iran, and is currently isolated in her home. The patient has respiratory symptoms, but is not in serious condition and has been in a controlled situation since arriving to New York.

"The positive test was confirmed by New York's Wadsworth Lab in Albany, underscoring the importance of the ability for our state to ensure efficient and rapid turnaround, and is exactly why I advocated for the approval from Vice President Pence that New York was granted just yesterday."

But, the problem with the "European" virus, Gov. Cuomo now argues, is that the Trump Administration did not institute a European travel ban soon enough:

“So, New York, the East Coast, people were landing at JFK. They were landing at Newark Airport, and that's where the virus came from: January, February, March. Nobody knew. European travel ban goes into effect mid-March, it's too late. It was already here.”

Gov. Cuomo said the responsibility for realizing that the virus came to New York from Europe lies with somebody “above my pay grade”:

“The virus came from Europe, whoever would have figured that? Somebody should've - but above my pay grade.”

Still, even though “We had this European virus attack us and nobody expected it,” Cuomo said, New York is going to do a better job of changing the trajectory of the virus than anywhere else in the U.S.:

“New York, the cases are now on the decline. You look at the rest of the nation outside of New York, the cases are still on the incline. We took the worst situation in the nation and changed the trajectory. So, now we are on the decline. The rest of the nation, the cases are still on the incline. That is because of what the people in this state did. If you had said when we started this, yes we have more cases than anyone else, yes we had this European virus attack us and nobody expected it, but we are not only going to change our trajectory, we're going to change the trajectory more dramatically than any place else in the nation.”