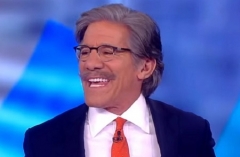 “Taliban stooges are driving our Humvees and eating our lunch” due to the “most bungled retreat ever” – President Joe Biden’s withdrawal of troops from Afghanistan – commentator and Journalistic Geraldo Rivera said Monday.

“Experts attempting to explain utter failure of our foreign and military policy regarding #Afghanistan is pathetic. #DonaldTrump wanted out. @JoeBiden followed thru with the most bungled retreat ever. We just left. Now #Taliban stooges are driving our Humvees and eating our lunch.”

“Attempting to sneak out in the dark of night” instead of conducting an orderly withdrawal, was a mistake, which Biden is responsible for, Rivera says:

“Instead rushing troops to #Afghanistan as the country collapsed, why didn't @POTUS @JoeBiden send them a month or two earlier to provide an orderly withdrawal? Attempting to sneak out in the dark of night, Joe screwed up & bears responsibility for this humiliating inevitability.”

Biden owes Americans an explanation for the “profound failure of our intelligence community,” which believed that the Afghan army could, and would, stand its ground against the Taliban after U.S. troops left, Rivera says in two follow-up tweets:

“@JoeBiden must address the nation to explain profound failure of our intelligence community. How did they so grossly overestimate the combat capability of the Afghan Army? Was it ever likely the Afghans would continue fighting once we pulled out? Who told Joe they would fight?”

“How did @JoeBiden get it so wrong? Which intelligence agency forecast that the supposed "300,000 strong Afghan Army" would defend their country? Instead, we left, they choked.”